Oded Dvoskin 6/13/2018 8:57:33 AM
We recently announced that all App Service and Functions apps could update TLS configuration. However, after deployment, an edge case scenario was identified involving SNI-SSL which led to SSL analyzing tools such as SSL Labs, showing that TLS 1.0 was still accepted, while higher versions were selected. We have now completed the deployment which solves the issue for SSI-SSL and will also translate to the reporting tool indicating correctly that lower versions of TLS, mainly TLS 1.0, are indeed blocked.

To update your TLS configuration, follow one of the methods below: 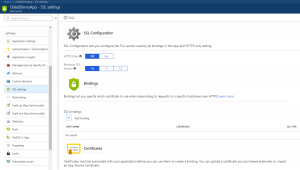 For any questions, please reach out over the App Service MSDN forum.

Auto-healing is a heavily used diagnostic feature of Azure App Service that allows end-users to configure a rich set of triggers that can be used to mitigate...