A crash of a process happens when the process terminates due to an unhandled exception within the application code. A crash leads to a restart and all the in-flight requests (requests currently being handled by the process) are aborted abruptly and may fail with an HTTP 502 error. The process restart causes the application startup code to kick in and the result might be observed as slowness in the application for end-users. Hence, crashes should be avoided as much as possible! Proactive Crash Monitoring is a feature of Azure App Service that checks for process crashes and collects diagnostic data that helps you determine the root cause of the crash.

How does Proactive Crash Monitoring work?

Whenever the worker process (w3wp.exe) corresponding to your app crashes due to an unhandled exception for more than 3 times in 24 hours on the same instance, the feature is enabled automatically and a debugger process is attached to your site’s main worker process. This debugger process then waits for your process to crash again and, assuming it does crash again, a memory dump is collected. This memory dump is then analyzed and the call stack of the thread that caused the crash is logged in your App Service’s logs.

Folow these steps to view the crashing thread’s call-stack.

How frequently are the crash dumps recorded?

Once a memory dump is captured on an instance, further memory dumps on the same instance may not be captured for the next 8 hours even if the process keeps crashing.

What happens to the memory dump that is collected?

Since the memory dump contains PII data, the memory dump is deleted once the call stack and exception information is recorded. There is no way to retrieve this dump later as this dump is not stored or persisted anywhere. If you need to capture a memory dump for further investigation and a call stack alone is not sufficient, then leverage the Crash Monitoring feature of Azure App Service that allows you to collect memory dumps on process crashes.

Which processes are monitored by this feature?

Are there additional processes started as a result of this feature?

When this feature is trying to capture a crash dump of your process, you may see CrashMon.exe, procdump.exe, or dbghost.exe running in the Kudu Console for your app.

Are we notified for unhandled exceptions recorded by this feature?

We notify by sending emails to the “ServiceAdmin”, “AccountAdmin” and “Owner” roles for the subscription when a crash is recorded by this feature. 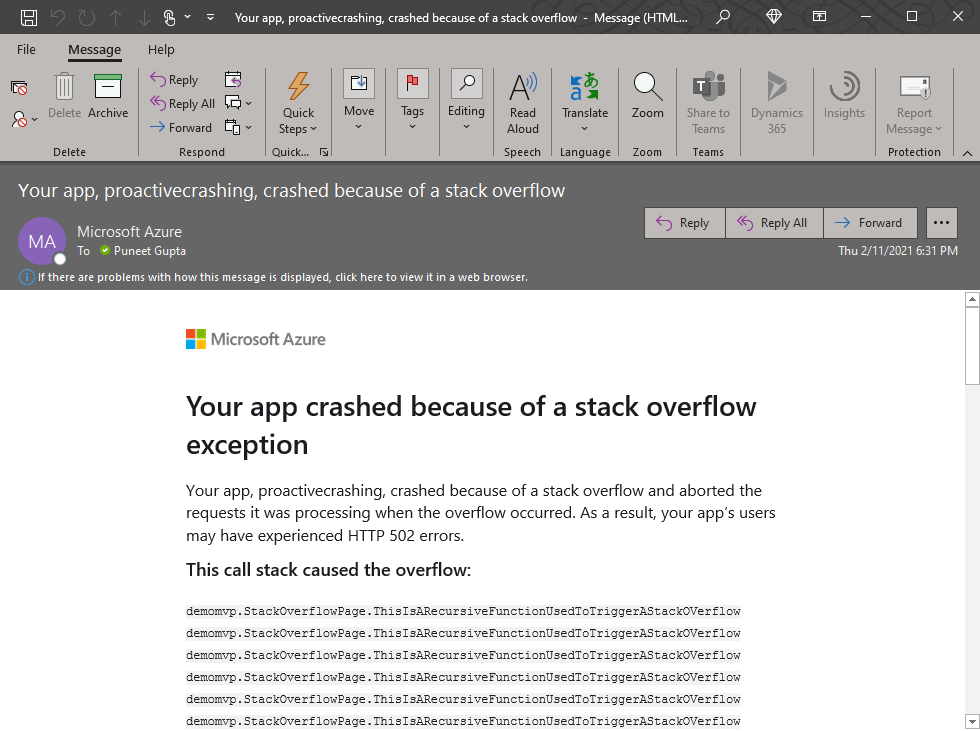 What is the performance overhead introduced by the feature?

There might be slight performance impact to your app because a debugger process is attached till the worker process crashes once. The overhead introduced should be negligible but only for apps that have very high exceptions per second rate, some delay may be observed.

Can this feature be disabled?

You can opt-out of this feature by adding the APP SETTING WEBSITE_PROACTIVE_CRASHMONITORING_ENABLED and setting it to FALSE.

You may have noticed that we recently rolled out a change in the “Essentials” section of the App Service “Overview” blade in the Azure portal where the URL t...