First, we will cover troubleshooting tools for debugging Web Apps running on Azure App Services for Windows. These steps can be applied to apps built using any framework such as ASP.NET, Node, PHP, or Java running on a dedicated hardware tier (Basic or higher). 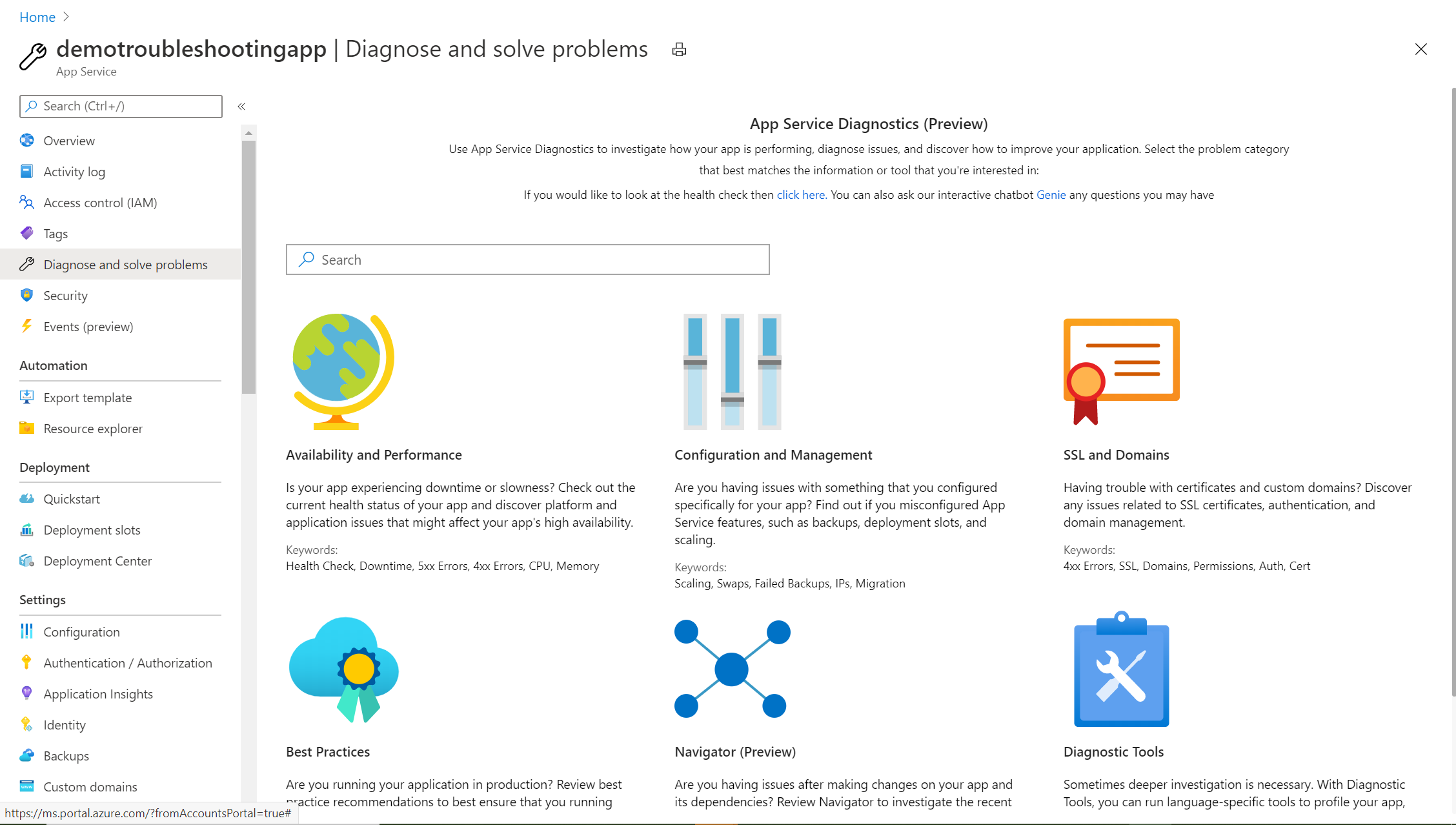 On this page, you can see an overview of your app’s health as well as various topics related to availability and performance. The time duration for the graph’s defaults is the last 24 hours, but you can modify it if needed. 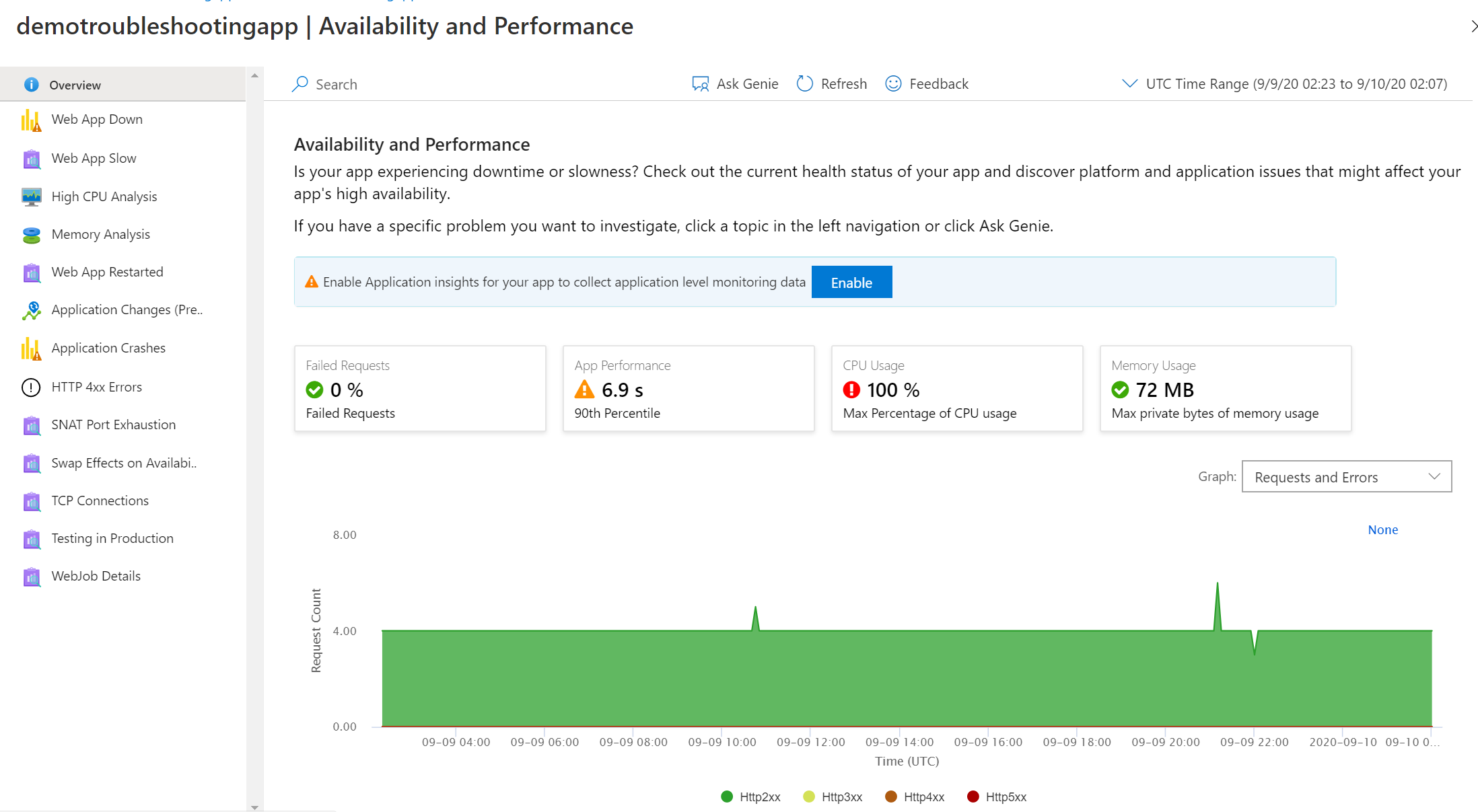 The main topics presented are as follows: 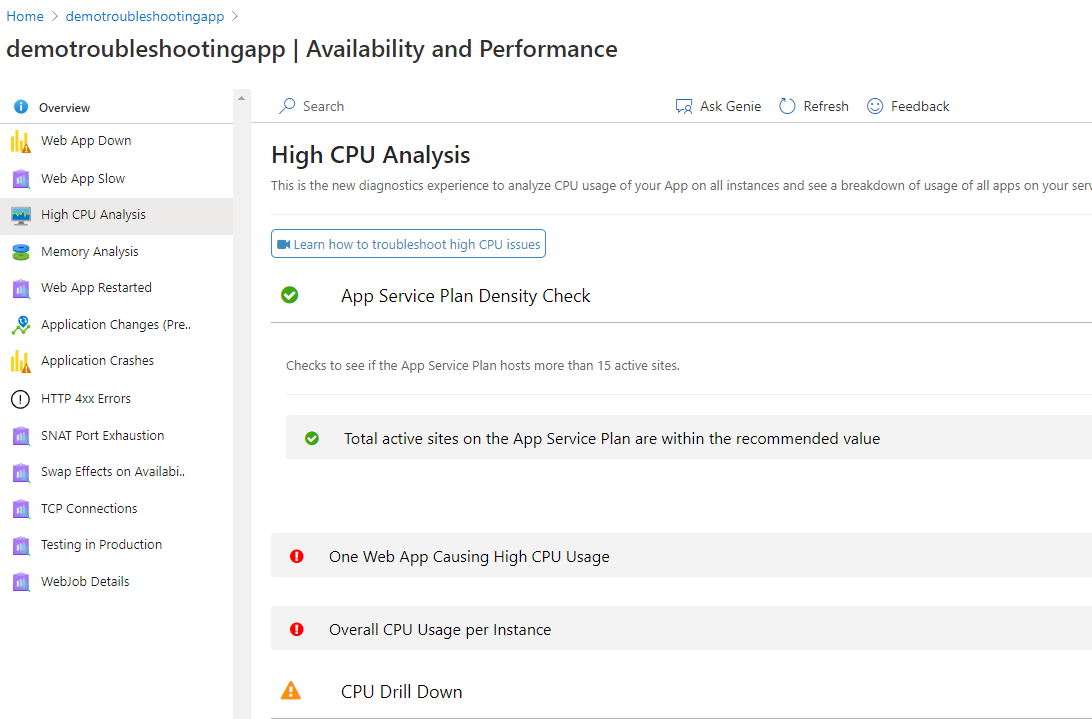 Below you can see the overall CPU usage for all the instances associated with the App Service Plan. In this example the app is running in two instances that are consuming high CPU. 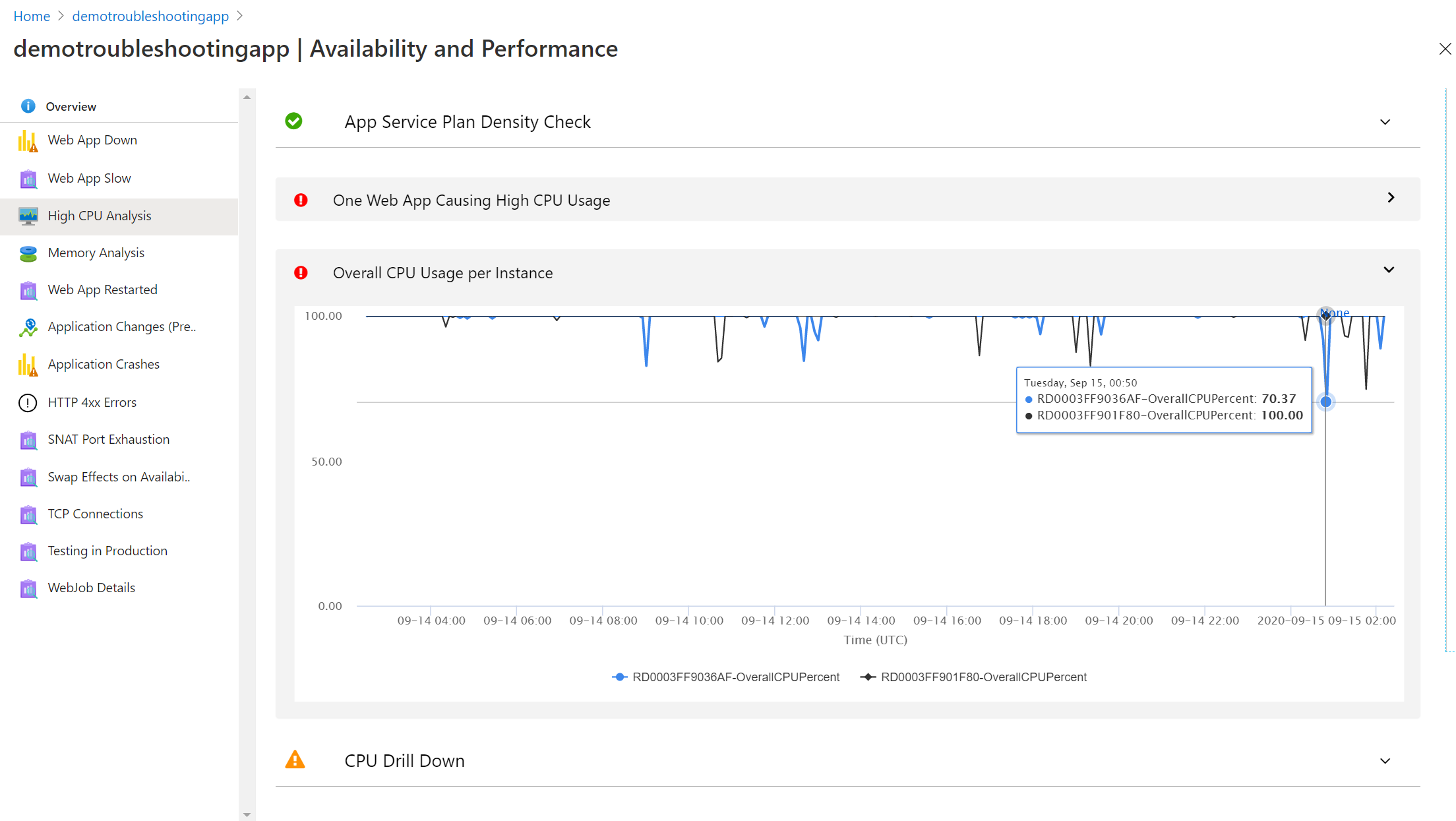 Below the graph you can see a drill down view that displays the App-level CPU consumption for the app running on the same App Service plan. This tool identifies each individual apps running in the instance. By default, the instance with the maximum CPU usage will display first. In this example we can see the CPU maximum usage and average of demohighcpu. 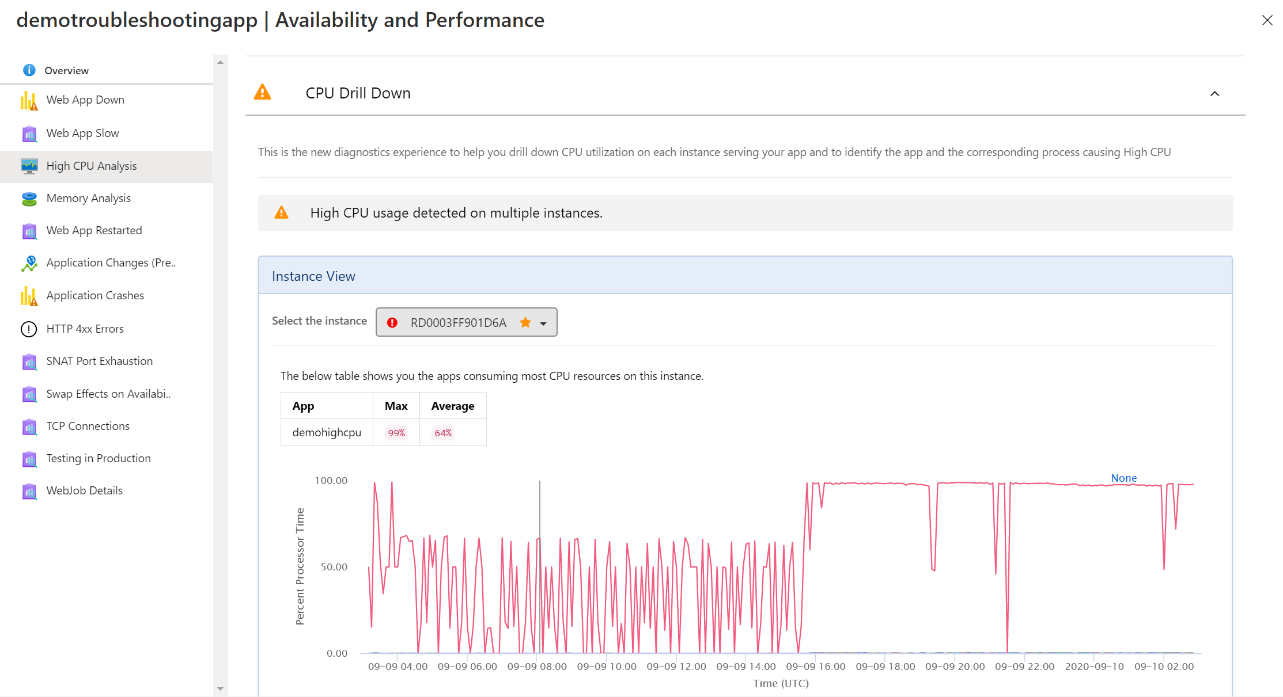 Next, you can see a process level breakdown of each app. By default, the app with the maximum CPU is preselected.

A drop-down view appears. You can switch between apps running on the same app service plan. In the example, you can see a breakdown of the process name and process ID. 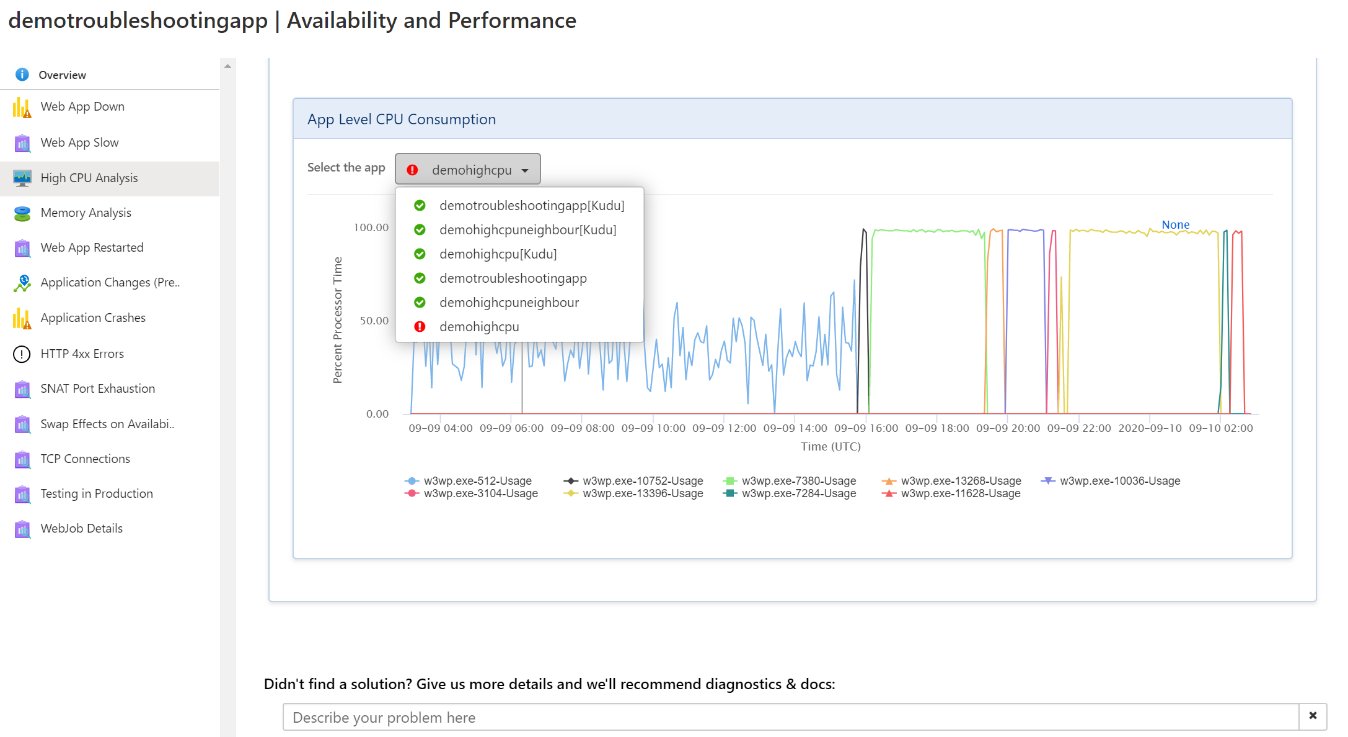 After identifying the app causing high CPU, debug the app to identify why the CPU is high. The next article will go over the techniques you can use to debug the app. Some possible mitigations you can apply are:

In the example, we saw demohighcpu is consuming the maximum CPU. Next, we will debug the app further to identify the cause of the high CPU in the next post. If you want to watch an in-depth tutorial on this topic, click on the video below!

Quickstart: Intro to Bicep with Web App and DB

Get started with Azure App Service by deploying an app to the cloud using a Bicep file and Azure CLI in Cloud Shell. Because you use a free App Service tier,...

One of the tools that Azure provides to enforce governance and controls is Azure Policies. By employing Azure policies, IT organizations are able to enforce ...