Paul Batum 9/19/2017 7:07:33 PM
Customers often ask us about the scalability/throughput limits of the consumption plan for Azure Functions. The short answer is always "it depends, what does your workload look like?". Today I want to talk about running high scale Event Hub / IOT Hub workloads on Functions and some key points to be aware of in order to maximize the performance you get from the platform. We partnered with the Azure CAT team to build a simple but representative event processing pipeline using Functions and Event Hubs, with telemetry going into Application Insights:

The load generator (also running on Functions) writes batched messages to an ingestion event hub. These messages represent a set of readings from a given sensor. Functions picks up messages from the ingestion event hub, extracts individual readings from the batch and writes them to the target event hub, augmenting the messages with additional telemetry along the way. Two more functions within the same function app (on the consumption plan) each process the individual readings and send aggregated telemetry to App Insights.

We ran the system under a target load of 100,000 events per second for a total of 9 days. Over that time the system processed a total of 76 billion events. We measured the e2e latency of the pipeline i.e. amount of time taken between writing the message to the ingestion hub and processing the message in the weather/seismic function. Here are the results:

Azure Functions has two built in monitoring solutions - the WebJobs dashboard and Application Insights (integration between Azure Functions and App Insights is currently in preview). The dashboard was designed with longer running jobs in mind and isn't optimized for scenarios where there are 10,000+ function executions happening per second. Fortunately, App Insights is an incredibly robust telemetry system and we've made sure that it works great with Azure Functions in high scale scenarios. Turning on App insights is really easy - just add your instrumentation key to your function app and Azure Functions will start sending data to App Insights automatically. For more info see here. The Azure dashboard is highly customizable and App Insights has great support for pinning its visual components. It only took an hour or two to put together a pretty useful monitoring dashboard for this scenario:

We made some notable configuration choices to achieve this result: See below for additional details on each of these.

An event hub triggered function can be written to process single messages or batches of messages. The latter has much better performance characteristics. Lets take the splitter function as an example: The main things to note about this code: The array based approach performs better primarily due to per function execution overhead. The system performs a number of actions when invoking your function and those actions will only happen once for an array of events rather than once per event. Note: for JavaScript functions you'll need to explicitly set the cardinality property in your function.json to many in order to enable batching (e.g. see here). This approach to exception handling is important if you want to ensure you don't lose/skip messages. Typically you'll write your exception handler so that it stores the event that failed for later processing/analysis. This is important because Azure Functions does not have any built in dead lettering for Event Hubs.

As mentioned above, because we were using App Insights for monitoring we disabled the dashboard. To do this simply go to your application setting and remove the AzureWebJobsDashboard setting.

Azure Functions uses the EventProcessorHost (for more info see here) provided in the Event Hubs SDK to process event hub messages. The way EventProcessorHost works is that each VM running your app acquires leases to some of the partitions, allowing it to process messages on those partitions. This means that if your event hub has only two partitions, only two VMs can process messages at any given time i.e. the partition count puts an upper limit on the scalability of your function. The basic and standard tiers for Event Hubs have a default limit of 32 partitions per event hub, but this limit can be increased if you contact billing support. By setting the event hubs to have 100 partitions, each function was able to run on 100 VMs simultaneously. We can see this if we look at one minute of telemetry, counting the number of unique VMs that executed the weather function: 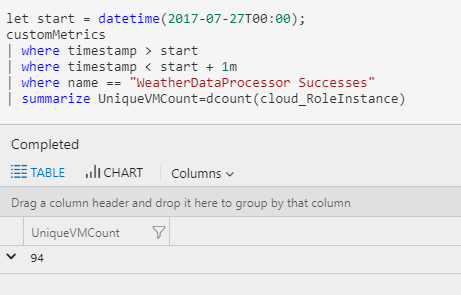 We can get an idea of how evenly the work was distributed over those 94 VMs with another simple query:

The event hubs programming guide has a good summary of partition keys and when you might want to use them. This scenario had no ordering or statefulness requirements so events were generated without partition keys. This increased the overall throughput and availability for the run.

If you're writing and reading 100,000+ events a second, you want the serialization and deserialization of those events to be as efficient as possible, both from the perspective of time taken to do the serialization step and also size on the wire. Protocol Buffers is a high performance serialization format that is easy to work with. Here's some example code deserializing and processing a batch of weather readings from an event: If you'd like to see the .proto file used for this scenario see here.

The consumption plan for Azure Functions is capable of scaling your app to run on hundreds of VMs, enabling high performance scenarios without having to reserve and pay for huge amounts of compute capacity up front. To learn more about Azure Functions and building cloud applications on serverless technology, start here.