Donna Malayeri 8/14/2017 11:00:16 AM
We're excited to announce that Azure Functions tools for Visual Studio are out of preview! The tools are now included in the Azure workload of Visual Studio 2017 Update 3. Just update your existing VS 2017 installation to Update 3--there's no need to use the preview channel or manually install the Functions tooling extension. The tools support building and publishing a class library as the implementation of your functions. Configure bindings and triggers using attributes in your code, rather than a separate metadata file. To get started with the tools, check out these articles: 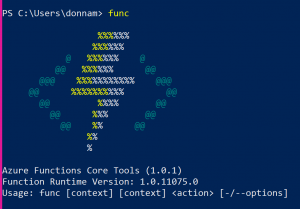 What's new in this release

If you've used the preview tooling, you've probably seen the package Microsoft.NET.Sdk.Functions. This package is automatically added by the New Function project template and ensures that generated files are always in sync with your code. In this release, only triggers are generated in function.json. There is a new property in function.json that tells the runtime to use .NET attributes for input and output bindings, rather than function.json configuration: [sourcecode language="plain"] "configurationSource": "attributes" // possible values are "attributes" or "config" [/sourcecode] If the value of configurationSource is attributes, then the contents of function.json cannot be changed after it is generated. That is because the Functions runtime uses attributes in the assembly to configure bindings and triggers. (If you’re wondering why some properties are still in function.json, it’s because the Scale Controller uses it to make scaling decisions on the Consumption plan.)

We’ve seen a great response to our preview tooling and we’re excited to release this version.

We have completed the initial rollout for .NET 7 GA support on App Service. Like in previous years we are using the App Service Early Access feature to enabl...

The 2022 H1 update to Azure App Service on Azure Stack Hub is now available. This release is a major update in terms of underlying infrastructure and topolog...

App Service free SKU has been around for over 10 years, and we continue to improve on it with every release. Today, we are pleased to announce that App Servi...

We are happy to announce that App Service now supports apps targeting Node 18, PHP 8.1 and Python 3.10 across all public regions on Linux App Service Plans t...