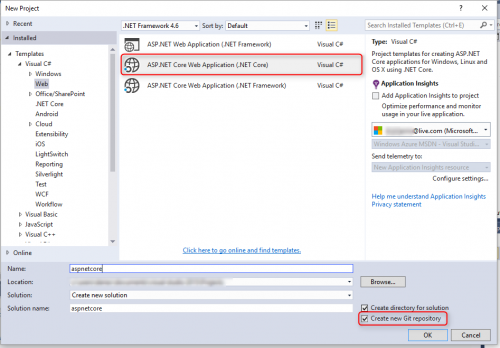 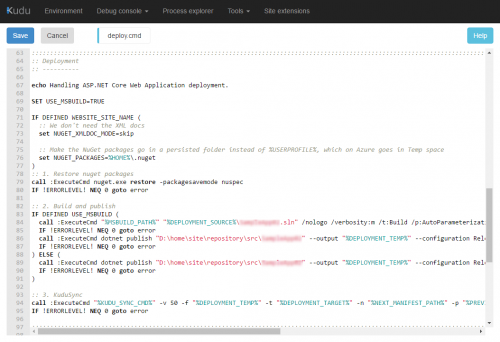 The first step in the deployment script is a NuGet restore with the home drive of the app as the restore location. Restore will be revisited for subsequent deployment only if new dependencies are detected. The next step in the deployment script detects the type of project. If the project originated from Visual Studio and a .sln file is available the deployment engine will run msbuild and then use the new dotnet.exe utility to publish with a no build flag. Otherwise use the new dotnet.exe utility to build and publish. All build actions are completed on the target Azure App Service hosting environment. An alternate Visual Studio deployment option bypassing source control is using the Publish action which will leverage WebDeploy to deploy to Azure App Service instead of leveraging the Kudu deployment engine. With this option build actions would be completed in the source development environment as opposed to build actions being completed in the target Azure App Service hosting environment. 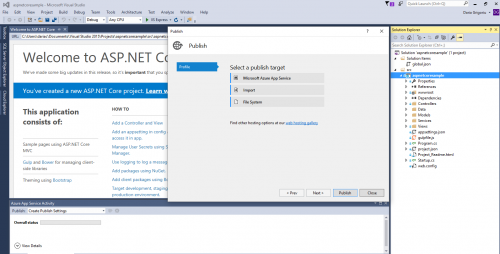 We have completed the initial rollout for .NET 7 GA support on App Service. Like in previous years we are using the App Service Early Access feature to enabl...

The 2022 H1 update to Azure App Service on Azure Stack Hub is now available. This release is a major update in terms of underlying infrastructure and topolog...

App Service free SKU has been around for over 10 years, and we continue to improve on it with every release. Today, we are pleased to announce that App Servi...

We are happy to announce that App Service now supports apps targeting Node 18, PHP 8.1 and Python 3.10 across all public regions on Linux App Service Plans t...