Welcome to Day 5 of #30DaysOfServerless!

And, we'll use this to explore another popular usage scenario for Azure Functions: building a serverless HTTP API using JavaScript.

If you're a JavaScript developer new to serverless on Azure, start by exploring the Azure Functions JavaScript Developers Guide. It covers:

Ensure you have Node.js 18 and Azure Functions v4.x versions installed, along with a text editor (I'll use VS Code in this post), and a terminal, then we're ready to go.

The application we're going to be building today will use the GitHub API to return a random commit message, so that we don't need to come up with one ourselves! After all, naming things can be really hard! 🤣

Once that's installed, we can use the new func command to initalise our project:

When running func init we can either provide the worker-runtime and language as arguments, or use the menu system that the tool will provide us. For brevity's stake, I've used the arguments here, specifying that we want node as the runtime and javascript as the language, but you could change that to typescript if you'd prefer to use TypeScript.

Once the init command is completed, you should have a .vscode folder, and the files .gitignore, host.json, local.settings.json, and package.json.

We have an empty Functions app so far, what we need to do next is create a Function that it will run, and we're going to make a HTTP Trigger Function, which is a Function that responds to HTTP requests. We'll use the func new command to create that:

When this completes, we'll have a folder for the Function, using the name we provided, that contains the filesfunction.json and index.js. Let's open the function.json to understand it a little bit:

This file is used to tell Functions about the Function that we've created and what it does, so it knows to handle the appropriate events. We have a bindings node which contains the event bindings for our Azure Function. The first binding is using the type httpTrigger, which indicates that it'll be executed, or triggered, by a HTTP event, and the methods indicates that it's listening to both GET and POST (you can change this for the right HTTP methods that you want to support). The HTTP request information will be bound to a property in the Functions context called req, so we can access query strings, the request body, etc.

The other binding we have has the direction of out, meaning that it's something that the Function will return to the called, and since this is a HTTP API, the type is http, indicating that we'll return a HTTP response, and that response will be on a property called res that we add to the Functions context.

Let's go ahead and start the Function and call it:

With the Function started, access the endpoint http://localhost:7071/api/get-commit-message via a browser or using cURL:

You created and ran a JavaScript function app locally!

It's time to update the Function to do what we want to do - call the GitHub Search API and get some commit messages. The endpoint that we'll be calling is https://api.github.com/search/commits?q=language:javascript.

Note: The GitHub API is rate limited and this sample will call it unauthenticated, so be aware of that in your own testing.

To call this API, we'll leverage the newly released fetch support in Node 18 and async/await, to make for a very clean Function.

Open up the index.js file, and delete the contents of the existing Function, so we have a empty one:

The default template uses CommonJS, but you can use ES Modules with Azure Functions if you prefer.

Now we'll use fetch to call the API, and unpack the JSON response:

To send a response to the client, we're setting the context.res property, where res is the name of the output binding in our function.json, and giving it a body that contains the commit messages.

The you'll get some commit messages: 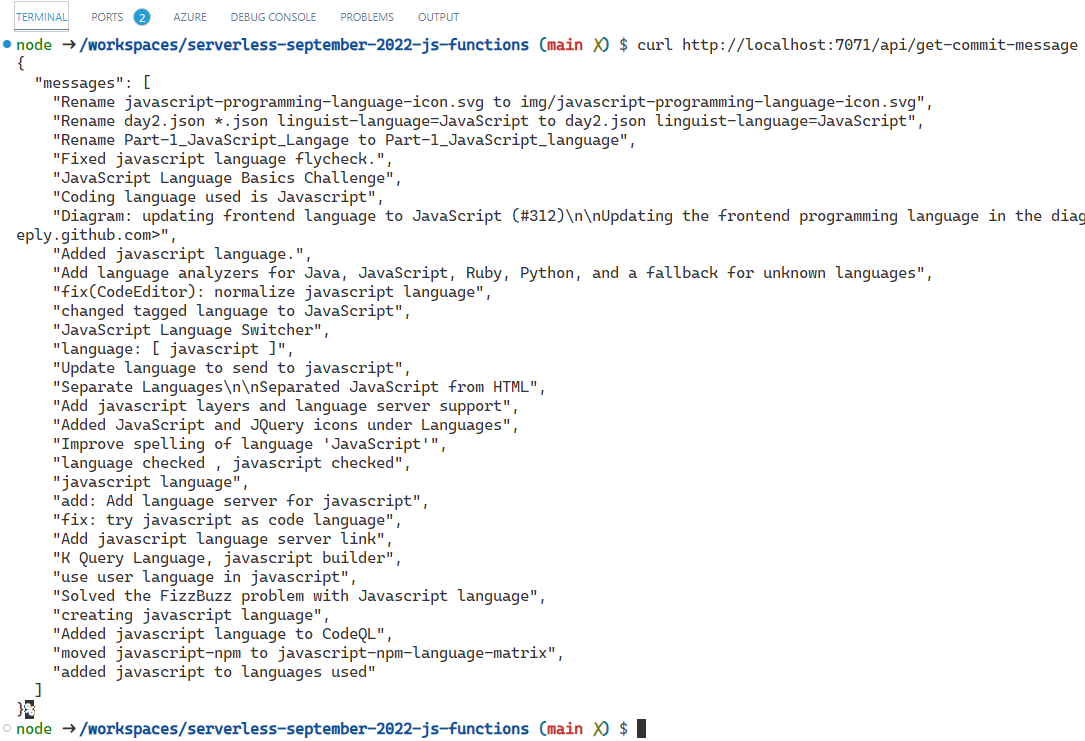 There we go, we've created an Azure Function which is used as a proxy to another API, that we call (using native fetch in Node.js 18) and from which we return a subset of the JSON payload.

This article focused on using the HTTPTrigger and relevant bindings, to build a serverless API using Azure Functions. How can you explore other supported bindings, with code samples to illustrate usage?

Once you've tried out the samples, try building an end-to-end scenario by using these triggers to integrate seamlessly with other services. Here are some suggestions: